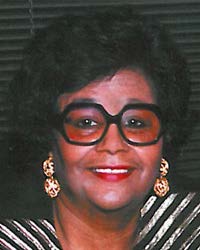 Henrietta Antoinin served as Vice President of Public Relations for Atlanta Life Financial Group and was a member of the senior management team. In this position, she managed and evaluated advertising and promotion programs for compatibility with the Company’s public relations efforts. She also observed social, economic, and political trends that might have ultimately had an effect upon Atlanta Life, and made recommendations to enhance the Company’s image based on those trends. Henrietta was listed in Who’s is Who in Atlanta as well as Dollars and Sense magazine who honored her as one of America’s top 100 Black business and professional women. Ebony magazine has also listed Henrietta as one of the 100 most promising Black Corporate Women in America. In 2004, she was inducted into the Hall of Fame for Women by the Atlanta Business League who also named her Atlanta’s 2005 Top Black Women of Influence. She was appointed by Governor Zell Miller as Lieutenant Colonel De Camp Governor’s staff and honored by Governor Roy Barnes with an appointment as Commissioner of the Martin Luther King Jr. State Holiday. She also served as a member of Governor Barnes’ Inaugural Committee. Henrietta was an active member of the Public Relations Professionals organization and had been appointed Vice-Chair of the Democratic Party Coordinating Committee. As a very powerful member of the Board of Directors for the Atlanta Chapter NAACP where she was second Vice President, Henrietta was responsible for positive change in the Atlanta community. In 2001, she received the highest Atlanta NAACP honor, the Jondelle Johnson Leadership Award. She has chaired the membership drive and served as chair for the Freedom Fund Dinners. The Butler Street YMCA benefited from Henrietta’s leadership where she served as Chair of the Board of Directors for 3 years. She has also served on the Board of Directors for the American Association of Insurance Professionals. As a Trustee of the Gate City Day Nursery Foundation, she brought many positive changes while serving as the Curator/Coordinator of the Atlanta Life National African-American Art Competition and Exhibition, which involved hundreds of African-American artists throughout the United States. Today Atlanta Life owns one of the largest and finest collections of African-American art in the nation. This formed the foundation for the birth of the National Black Arts Festival in Atlanta, GA. Henrietta was the founding president of the Atlanta Political Congress of Black Women where the national chair was Dr. Shirley Chisholm. Henrietta is a member of the Georgia Coalition of Black women and was on the Board for the Atlanta Rainbow PUSH Coalition Wall Street Project. She is currently the Chairman of the Board of the Americolor Opera; the only African-American opera company in the world. Henrietta is a fifth-generation member of Friendship Baptist Church which she attends with her daughter, Letrease, and two grandchildren Amber and Terry Lynn and enjoys singing in the Senior choir as a contralto soloist. Atlanta Life Financial Group saluted Henrietta Antoinin in 2008; the only former employee who has had the privilege of serving under 6 of the 7 presidents at Atlanta Life and celebrated her 46 years of service. Her commitment and dedication will live in Atlanta Life’s memory and in the Atlanta community.